Alarcón’s third collection of seasonal poems takes a more personal turn, as his poems here relate directly to his own childhood growing up in Los Angeles. The child of Mexican parents, his portry reflects a bicultural heritage with which many children will identify. The poems, in both English and Spanish, celebrate such things as his grandmother, the market, the ice cream vendor, starting school, Day of the Dead and Thanskgiving. Previous collections by the same author artist include Laughing Tomatoes, and Other Spring Poems (1997) and From the Bellybutton of the Moon, and Other Summer Poems (1998), both published by Children’s Book Press. (Ages 7-10) 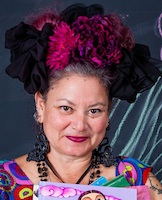