Four words—orange, pear, apple, and bear—are rearranged and visually reinterpreted several times in a clever bout of wordplay. Syntax, punctuation, and illustrations all play an important part in getting the meaning of the words across. For example, “Apple, pear” is illustrated with simple watercolor painting showing a pear balancing on top of an apple. On the facing page, the words “Orange bear” are illustrated with an orange-colored bear. A pear-shaped bear holding an apple and orange illustrates the phrase “Apple, orange, pear bear.” In the end, each piece of fruit is eaten by the bear in quick succession: “Orange, bear / Pear, bear / Apple, bear” and finally “There.” Emily Gravett’s jaunty illustrations display an expert use of white space, color, and composition. (Ages 2–4) 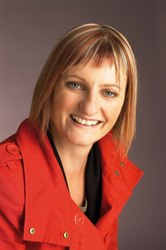