Sojourner Truth: Ain't I a Woman?

When she was 46 years old, an African-American woman called Belle who had been born... read more

When she was 46 years old, an African-American woman called Belle who had been born into slavery renamed herself. She became Sojourner Truth, a pilgrim who spoke, sang and recited long passages from the Bible before white and black audiences wherever matters concerning freedom were discussed and debated. The McKissacks trace how Sojourner Truth became a staunch abolitionist and effective advocate for women's rights, and they relate the tragic personal losses suffered by this amazing leader. This outstanding biography is documented with photographs, a bibliography and capsule biographies of fourteen of the women and men who were Sojourner's contemporaries in 19th century movements for liberation. (Ages 10-14) 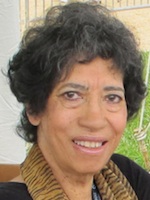