The Negro Speaks of Rivers

by Langston Hughes and E.B. Lewis

From realistic views of individuals working or relaxing near the water to metaphorical... read more

From realistic views of individuals working or relaxing near the water to metaphorical scenes suggesting ideas such as “My soul has grown deep like the rivers,” each artfully composed two-page spread in this picture book powerfully links the words of Langston Hughes’s poem “The Negro Speaks of Rivers” with images of the rivers and people of which he writes. In a note about the artwork he created, illustrator E. B. Lewis writes of how “water has played a powerful role in the lives of black people. It has been the boon and bane of our existence. We have been born out of water, baptized by water, carried by, and even killed by water.” All of his illustrations picture the rivers referenced in Hughes’s narrative with a distinctive character, color, and texture, serving as a vital backdrop to the human life shown in the foreground. Lewis’s evocative art encourages thoughtful contemplation of Hughes’s words but also serves as stirring visual composition in its own right. (Age 10 and older)

Meet-the-Author Recording with E.B. Lewis about The Negro Speaks of Rivers 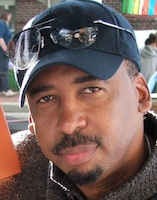