When eleven-year-old Aubrey’s mother abandons her, it’s another trauma in a year that has brought too many. The facts of the past unfold in bits and pieces in Suzanne LaFleur’s profoundly moving portrait of a child’s grief and first steps toward healing. Aubrey’s dad and sister were killed in a car accident. Her mother’s disappearance is a direct result of the guilt (she was driving) and grief she hasn’t been able to move beyond. Now living with her grandmother, Aubrey’s own sadness and guilt (why did she live when her little sister did not?) come in waves that are unexpected and powerful when they hit. With the safety and security provided by Gran and extended family, Aubrey gradually starts to trust the people around her, from Bridget, the girl who lives next door, to the counselor at her new school. The book’s title refers to Aubrey’s closing lines in the letters she writes throughout the novel to those she’s lost—and in one case finds again. There’s no quick and easy happy ending to LaFleur’s novel, but its gradual movement from despair to hope is achieved with great sensitivity and realism. (Ages 9–13) 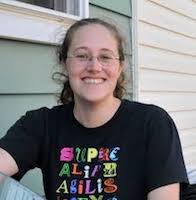