Opportunity clashes with tradition in a lively novel set in 15th century Korea. Brothers Young-sup and Kee-sup are occasionally prickly toward one another, but for the most part theirs is a warm and loving relationship. Kee-sup is skilled with his hands and has a talent for kite-making. Young-sup has no patience for the detail work of making a kite, but he is a wonder at flying them. When the young king spots the brothers flying one of Kee-sup’s kites, he asks Kee-sup to make a kite for him. Then he asks Young-sup, with whom he begins a friendship, to fly the dazzling new kite in the annual New Year’s kite competition. But the boys’ father believes that such an honor should go to the eldest son. Already feeling like an invisible second son, Young-sup cannot see beyond his own hurt and anger until Kee-sup reveals his own unhappiness at the role tradition holds for him and bravely challenges their father on Young-sup’s behalf. A buoyant story told in Young-sup’s voice and enriched with cultural detail and appealing, well-rounded characters builds to an exciting and satisfying conclusion as the kite competition plays out on the page. (Ages 8-11) 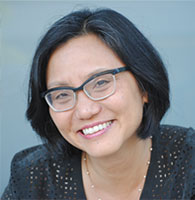