The Thumb in the Box

by Ken Roberts and Leanne Franson

A great read-aloud that will also delight young independent readers is set in a small... read more

A great read-aloud that will also delight young independent readers is set in a small Canadian village off the coast of British Columbia. As seen through the eyes of young Leon, no one in New Auckland is ordinary. Singular, quirky, extraordinary individuals populate his village. Annie Pritchard is a famous artist who painted her largest work on the floor at the center of the community’s indoor basketball court — a gift to the village she loves. Leon’s best friend, Susan, is “a genius when it came to facts.” But, Leon reveals, “she could always be fooled by something that wasn’t in a book.” That’s how Leon knows Susan is sure to fall for the old “thumb-in-the-box” trick of “Little” Charlie Semanov that no one under ten can resist, just as he fell for it himself. And then there is Big Charlie, the mayor, who can’t persuade a member of Parliament that New Auckland needs only a water pump, not a fire engine. But when the unwanted engine arrives, along with the member of parliament and the media, Big Charlie is ready. The savvy reception he’s orchestrated involves the entire community in a series of increasingly hilarious missteps. Finally, the village gets exactly what it needs after all. Ken Roberts’s easy novel is full of humor and warmth. (Ages 7–10) 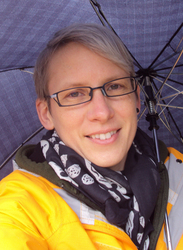