Boy of the Deeps

The “deeps” were the coal mines of Cape Breton, Nova Scotia, a virtual... read more

The “deeps” were the coal mines of Cape Breton, Nova Scotia, a virtual city under the waters of the Atlantic Ocean. James is the boy, and like many boys working in mines across the globe, his childhood is actually behind him. Each day James now goes underground to work with his father in the deeps. He started out above ground as a breaker boy, doing the difficult job of sorting pieces of sharp slate from coal. He’s now headed regularly a thousand feet underground to the tedious, dangerous, health-robbing, rat-filled environment where boys and men work side by side to mine the rich coal deposit under the sea. Wallace’s story captures the ominous nature of this work, as well as the life-threatening event James’ father experiences one day. He ingeniously created sources of light for the acrylic paintings he developed to illustrate a story set mostly in dark, dank places. Wallace’s picture book story is based on his grandfather’s experiences as a boy working in a coal mine in England. The Cape Breton coal field was still in production at the time this book was published. (Ages 8-11) 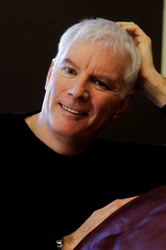