I Will Come Back for You: A Family in Hiding During World War II

A little girl learns about the bracelet her Nonna never takes off: Each charm represents... read more

A little girl learns about the bracelet her Nonna never takes off: Each charm represents a piece of the story telling what happened to Nonna’s family, Jews living in Italy, during World War II. They left Rome to stay with friends in the county and be near Nonna’s father, who’d been detained nearby by the Nazis. When word came that Jews were going to be sent away, the family escaped with the help of friends. Nonna, her mother, and brother spent most of the war in hiding on a farm. Nonna’s father joined the resistance and was later killed. Nonna conveys the events to her granddaughter with honest sensitivity in Marisabina Russo’s tender story based on the experiences of her mother, who became a partisan like her husband—the father in the story. Russo provides more details about her mother’s real story in an afterword that, along with the family photographs gracing the endpapers, heightens the poignancy of this picture book. (Ages 5–9) 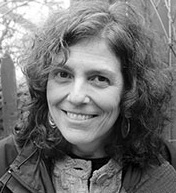