Little Pig suffers the fate of being the youngest in his family, and he doesn’t... read more

Little Pig suffers the fate of being the youngest in his family, and he doesn’t like it. As a matter of fact, he doesn’t even like being called Little Pig (his name is Jacob). A familiar scenario plays out when Grandpa unpacks his old marching-band instruments: Little Pig is too little to play the drum, the trombone, the trumpet, and especially the tuba. His older siblings seem to be running the show as they practice the instruments, until an unfortunate musical move causes chaos when they tumble over one another. Little Pig astutely assesses the situation and takes on the role that is missing: a band leader. Under Jacob’s confident direction, the band marches on. The brief text highlights Little Pig’s frustration, a feeling common to young children everywhere, and provides a clever resolution. Dialogue incorporated into the fresh ink and watercolor art adds an extra layer of interest to this upbeat tale. (Ages 2–5) 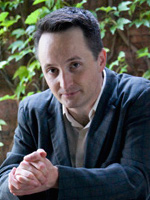