H.O.R.S.E.: A Game of Basketball and Imagination

Two African American teens seemingly engaged in a friendly game of H.O.R.S.E. on the basketball court are actually engaged in a dazzling contest of imagination and one-upmanship as each comes up with increasingly outrageous ideas for shots. The first suggests he’ll “shoot a perfect layup, with my left … foot” from atop a 437-story building, after calculating the wind speed and direction. The other counters with his “Magellan” shot—one jump around the world. “As I approach the court, somewhere over New Jersey, I’ll raise back, open my mouth, dunk the ball through the basket there, with my tongue!” The first teen’s response: a shot involving a cloud, the moon, and the rings of Saturn. It’s all fun and games in Christopher Myers’s dynamic story, which has wit in both the wordplay and the art. The two characters’ speech is delineated by different colors of text, making the back-and-forth exchange easy to follow. (Ages 5–10) 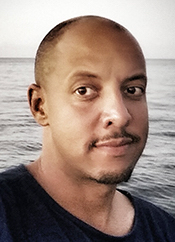