Cornelia Funke’s second novel published in the United States is a highly original fantasy story. Meggie is a reader and lover of books, a trait she inherited from her father, Mo. On a dark and stormy night, a mysterious stranger named Dustfinger shows up at their door. But he’s no stranger to Mo, who is reluctant to tell Meggie who Dustfinger is. The truth turns out to be stranger than anything Meggie could ever have imagined. When Meggie was three years old, Mo was reading a novel called Inkheart aloud to Meggie’s mother. Dustfinger was a character in that story. As Mo read, Dustfinger and others from the world of Inkheart —including the sinister, power-hungry Capricorn—became flesh and blood in this world. At the same time, Meggie’s mother disappeared into the world of the novel. These startling revelations unfold as as Meggie and her father are on the run: Dustfinger’s arrival means that Capricorn has finally tracked Mo down. There is one more character from Inkheart— a terrible, awful force—that Capricorn wants Mo to read into this world. Funke’s richly imagined and vividly told story is a page turner, its unique plot peopled with intriguing characters. Dustfinger aches to return to the world of Inkheart , and will seemingly do whatever it takes to get Mo to read him back into the book, yet he is Meggie and Mo’s uneasy ally. Meggie’s Aunt Elinore, unwillingly dragged into the drama, lives only, at least at first, for her beloved books. And Meggie and Mo face temptations that complicate their thinking. For Mo, it is the possibility that he might be able to read Meggie’s mother back from Inkheart , if he dares. Meggie is eager to find out if she might share her father’s extraordinary ability, despite its potential dangers. Only the “bad guys,” Capricorn’s henchmen, are one-note characters, serving as part of the mood-setting backdrop for this complex story that will be relished by book-loving children and young adults. (Ages 9–14) 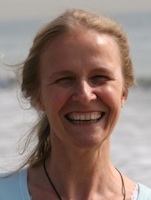