The Animal Book: A Collection of the Fastest, Fiercest, Toughest ...

In this treasure trove of information, Steve Jenkins relates fascinating facts about 300 different animals, looking at them in sections that examine various qualities, traits, and behaviors (Family, Animal Senses, Predators, Defenses, and Animal Extremes, such as size, habitat, and life span). An introductory chapter talks about the scientific classification of "Animal" as a kingdom that includes two groups-vertebrates and invertebrates-with various subgroups. The penultimate chapter, "The Story of Life," looks at evolution, natural selection, variation, mutation and other elements of survival, extinction, and change that have shaped life on earth. As always, Jenkins combines dramatic, eye-catching collage images of the many animals he's exploring with clever and succinct writing that focuses on one or more intriguing elements about each. Some of the artwork has been reused from his earlier volumes, but it and other illustrations are fresh and dynamic in this new context. And where does he get his ideas? In the closing chapter, "Making Books," Jenkins documents the process for making his books, from the original idea through research, preliminary art, final illustration, and production timeline, to give kids a sense of what goes into the book they hold in their hands. (Age 7and older) 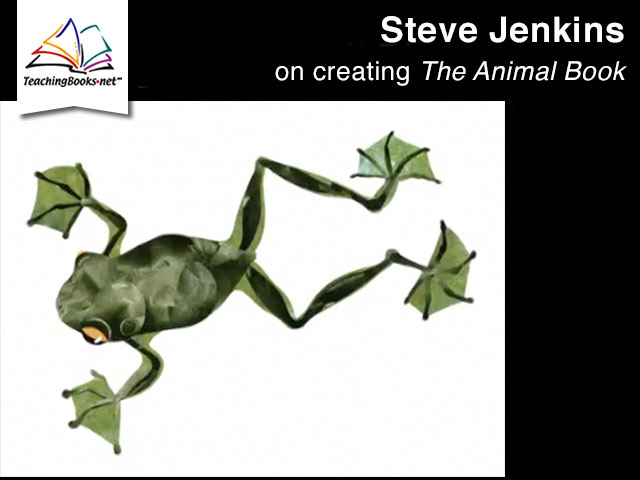 Steve Jenkins reads from The Animal Book: A Collection of the Fastest, Fiercest, Toughest ...

Meet-the-Author Recording with Steve Jenkins about The Animal Book

Steve Jenkins reads from The Animal Book: A Collection of the Fastest, Fiercest, Toughest ...