by David A. Kelly and Oliver Dominguez

Lena Blackburne " just wanted to be a great baseball player ... But he wasn't." Lena... read more

Lena Blackburne " just wanted to be a great baseball player ... But he wasn't." Lena played in the big leagues in the early twentieth century, but he was never going to be famous. Eventually, he became a coach, and found himself pondering the problem of soggy baseballs. The balls were water-laden because players soaked them to take the shine off new balls. Other methods to break in new balls had equally unsatisfactory results. Until Lena thought of mud. Not just any mud, but the mud at his favorite fishing hole at his home in New Jersey. It was smooth and gooey but gritty, too. Lena coated new baseballs and let the mud dry. When he wiped it off, the balls weren't soggy, and they weren't shiny. They were perfect for playing ball. Seventy-five years later, major league baseball teams still coat new baseballs with the "Baseball Rubbing Mud" that Lena started marketing back then. In fact, it's the only thing they're allowed to use. This quirky and intriguing bit of baseball history is engagingly recounted in this picture book account that provides additional information in the author's note. (Ages 6-9) 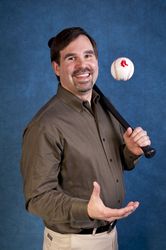 David A. Kelly page on TeachingBooks