In Danvers, Massachusetts, high school senior Colleen attends a private Catholic girls’ school where she and many of her friends are stressed out waiting to hear from colleges. Then a number of her classmates begin falling ill with an array of seemingly unrelated symptoms. One loses her hair. Another is paralyzed. Her friend Anjali begins coughing up metal. Some parents are up in arms. The media goes into a frenzy. A famous environmental activist shows up determined to prove toxic waste beneath the school’s playing field is at fault. Meanwhile, Colleen — who remains symptom-free and whose parents are archly skeptical and grounded — has been given a 62.5 on a history quiz. Her only hope of maintaining her GPA and staying in the running for valedictorian is an extra credit assignment on The Crucible . The primary narrative of this compelling novel stays focused on the contemporary story set in 2012. But periodic interceding chapters, set in Salem Village (situated where Danvers is today) in 1706, feature Ann Putnam, one of the accusers during the Salem Witch Trials, telling her minister the story of deception and hysteria in which she got caught up more than a decade earlier. Howe smartly establishes Colleen as a likable and level-headed main character, which makes it all the more shocking when Colleen herself begins having intense headaches and blackouts. An intriguing novel is followed by an informative author’s note discussing the mysterious illnesses among girls in LeRoy, New York, in 2012 — events that inspired this novel — and about conversion disorder, a type of stress response in which the physical symptoms are very real. (Age 14 and older) 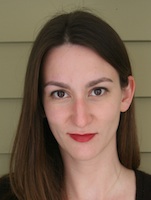 Interview Part I with Katherine Howe