To This Day: For the Bullied and Beautiful

There is nothing subtle about “To This Day,” a powerful spoken-word poem... read more

There is nothing subtle about “To This Day,” a powerful spoken-word poem in which Shane Koyczan gives a passionate account of the impact of bullying, beginning with his own experiences in childhood before bringing other stories into the light. He focuses not just on the child who is relentlessly bullied and teased, but on what happens to that child when he or she grows up believing they are worthless. Ultimately, Koyczan affirms the strength of survivors: “Because how can you hold your ground / if everyone around you wants to bury you beneath it / you have to believe that they were wrong / they have to be wrong / why else would we still be here?” This book, which can be a conversation starter in classrooms, is also, for all readers and listeners, testament to the profound power of language not only to hurt, but also to help heal. In an unusual reversal, this is a work in which the book came after the movie — or rather, the video, which went viral on YouTube after it was first released in February 2013. Thirty artists from around the world contributed to this work, each one of them illustrating a section of the poem. More about the poem’s origins, and efforts to combat bullying, are included. (Age 10 and older) 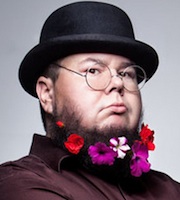