The final volume of the “His Fair Assassin” trilogy continues to interweave... read more

The final volume of the “His Fair Assassin” trilogy continues to interweave the lives of three handmaidens of death amidst the political intrigue and changing religious traditions of ancient Brittany. Annith is the most accomplished novitiate at the convent of St. Mortain, who serve Death. When the Abbess informs Annith she’s to become the next Seer for the Daughters of Mortain, a position that requires isolation in the convent rather than missions abroad, Annith is devastated. Angry that she will never be able to use her assassin skills to serve Mortain like Ismae and Sibella, and frustrated with the Abbess’s secrecy and duplicity, Annith decides to follow the Abbess to the court of Brittany to confront her. Waylaid by the Hellequin, the riders who hunt down lost souls as a way to earn passage to the afterlife, Annith feels a strong connection to their leader, Balthazaar. But she isn’t sure whether the Hellequin are hunting her for leaving the convent or actually protecting her from the Abbess and her corruption. Escaping, she reaches the court, where the duchess faces the political machinations of France in a final showdown to retain an independent Brittany. With a satisfying but not cliché conclusion that winds up the trilogy, Annith’s story offers an examination of religious, secular, and cultural identities and explores the blurred line between mortal, god, and myth. Delivering a compelling blend of religion, history, fantasy, political intrigue, and action-adventure, author Robin LaFevers keeps various threads and themes running consistently through the three novels. (Age 14 and older) 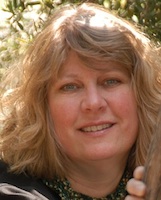