Noi, who lives with his father by the sea, spends most of his days by himself while... read more

Noi, who lives with his father by the sea, spends most of his days by himself while his dad works on his fishing boat. It’s a lonely life, until the morning after a storm when Noi sees a small whale stranded on the beach. Wanting to help, he carts it home on his small wagon. Once it is safely deposited in the bathtub, Noi enjoys the whale’s company as he tells it stories and plays water-themed music on the record player. At first his dad doesn’t notice the new addition to the household, but eventually he discovers Noi delivering a fishy meal to his friend and says they must “take the whale back to the sea, where it belonged.” As difficult as it is to say good-bye, the encounter with the whale alerts Noi’s dad to his son’s solitary days and the following pages show the two spending time together while Noi hopes that “one day, soon … he would see his friend again.” This warm, quiet story has an understated playfulness in both the words and the illustrations. (Ages 3–7) 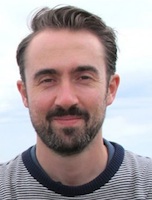