To Go Singing Through the World: The Childhood of Pablo Neruda

Deborah Kogan Ray’s picture book biography of the Chilean poet Pablo Neruda focuses on his childhood in the mill town of Temuco, where young Pablo lived with his father and beloved stepmother. He loved exploring the nearby rainforest and hungered for knowledge of other places. But he felt like an outsider at school, a quiet, studious boy with a stutter. “I didn’t want to be seen, / I didn’t want my existence to be known,” he later wrote. During his final year in school, Pablo’s life was changed by the new principal, a published poet named Gabriela Mistral who became his literary mentor. Ray’s narrative is skillfully interspersed with many excerpts from Neruda’s writing. Brief biographical information about Neruda, who is often referred to as “the people’s poet,” as well as Mistral, who was the first Latin American woman to win the Nobel Prize in Literature, rounds out this fully illustrated volume. (Ages 7–10) 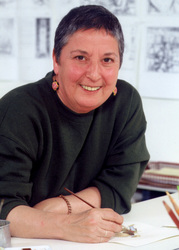