A Handful of Stars

Lily has never given much thought to the migrant workers who harvest blueberries... read more

Lily has never given much thought to the migrant workers who harvest blueberries in her Maine community. Then she meets Salma Santiago, and they become friends. When Salma, with Lily’s support, decides to enter the local Blueberry Queen contest—the first migrant child ever to do so—Lily’s friend Hannah offers to help, despite also being in the competition. In the hands of a less skilled author, this premise would turn into mean girl drama, but Cynthia Lord is sure-handed in a novel that focuses first and foremost on the deepening friendship between Lily and Salma but doesn’t freeze out Hannah. Lily, whose single mother died when she was two, wants her tightly contained world to be fixable when it isn’t predictable. She’s saving money so her dog, Lucky, can have cataract surgery, because she is convinced he’s miserable. Salma can’t control many things about her life, but her family is a reassuring constant. The same is true of Lily’s grandparents, but Lily misses not having a mother. Nuanced, fully realized characters and a well-developed story arc distinguish this quiet, satisfying novel in which Lily begins to see her life not in terms of what is missing, but rather what she has. (Ages 9–12) 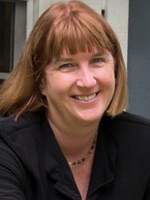