by Cheryl Blackford and Laurie Caple

“Down at the lake, the ice groans and thumps … Coyote slinks toward slick... read more

“Down at the lake, the ice groans and thumps … Coyote slinks toward slick ice. Wary and watchful, he sneaks past the crowd.” A lyrical text follows a city coyote through one year, with the search for food paramount across the seasons. In winter he pounces and misses a vole. In spring, “Coyote hunts to feed his famished family.” In summer, he makes off with picnickers’ fare for his growing pups. Autumn brings a flock of geese, and Coyote is able to snatch one. Autumn also brings the first signs of winter. Beautiful watercolor illustrations are the perfect backdrop for a lovely narrative that comes full circle. A brief note about city coyotes, and their close proximity to humans (referenced in both the narrative and illustrations throughout) is at volume’s end. (Ages 5–8) 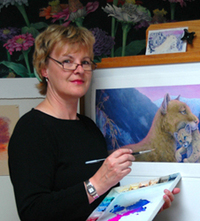