Isabelle Day Refuses to Die of a Broken Heart

Thirteen-year-old Isabelle Day has just moved from Milwaukee to Minneapolis following her father’s death in the early 1960s. Isabelle makes a good friend in her neighbor Margaret—the girls both attend the nearby Catholic school, where their teacher is a sharp, singular, sometimes surprising nun—while the elderly McCarthy sisters who live downstairs befriend both Isabelle and her mom. Everything in this superb, understated novel unfolds through showing rather than telling as it explores the way grief can settle beneath the surface of people’s lives. Isabelle initially thinks the McCarthy sisters are nosy; she gradually realizes their concern and goodness are genuine. She isn’t sure about her friendship with Margaret’s best friend, Grace, but slowly finds solid ground as one of three. And she initially idealizes her dad, but eventually allows the memories of harder times to surface. Still, the truth she doesn’t think she can tell is that he committed suicide. There is not a huge emotional arc to this story in which grief and loss echo through the lives a number of characters. Yet hope, and often humor, is present all along, and by book’s end it is clear Isabelle, while still grieving, has not only settled into her new home, but feels surrounded by love. (Ages 10–13) 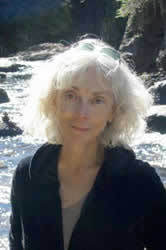