Jack plays the trumpet and looks forward to his first recital, until the big day... read more

Jack plays the trumpet and looks forward to his first recital, until the big day arrives. He wakes up with a Worry, and that Worry grows bigger and bigger as he eats breakfast. He tries to get rid of it, but nothing works. Not even playing his trumpet, which usually makes him happy. “I don’t want to go!” When his mom asks why, it takes Jack a moment to look right at his Worry and understand what’s inside: “I’m worried I’ll make a mistake and you won’t love me anymore!” A picture book about anxiety gets a big boost from the wonderful personification of Jack’s Worry. Originally a smallish blue-green blob with scribbled eyes, it grows bigger and bigger, darker and darker, looming over Jack. But once Jack defines his Worry, and once his mom reassures him that she’ll love him no matter how he plays, his Worry, while not disappearing altogether, becomes more than manageable. And when Jack gets to school and sees his friends, he also finds that he—and his now teeny-tiny Worry—are not alone. (Ages 4–8) 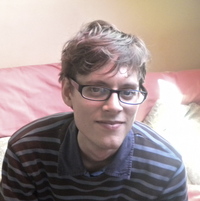 Blog for Sam Zuppardi: Brushing Up