A pair of books features the same engaging cast of stylized, round-eyed animal figures, with each book exploring a different concept. Near, Far highlights one animal at a time across a series of page spreads. Two large, green, camel-like humps become a series of wavy green scallops that in turn become an entire crocodile in the opening series. Later, what looks like the tip of an elephant’s trunk becomes what seems to be its head and eye but turns out to be a small bird when seen from far away. The concept of perspective as it relates to distance is sophisticated, but there is tremendous pleasure in each surprising reveal. In Now You See Me …, the entire cast of brightly colored animals appears on the opening page against a white background. With each subsequent page turn, the background changes to a color matching one of the animals so that it disappears—all except for its round white eyes and black pupils. Delightful, imaginative, and interactive, both books invite discussions and fresh ways of looking at the world. (Ages 2–4) 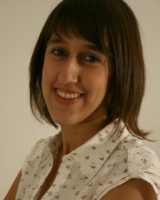