When Bat loses his home, he has a hard time finding a new one. One animal after another... read more

When Bat loses his home, he has a hard time finding a new one. One animal after another turns him away, but he finally finds the perfect spot inside a leafy nest up a tree. Squirrel’s already there, but she’s dozing and so Bat deposits the bugs he’s gathered on the bed and happily finds a twig to hang from and goes to sleep. Squirrel is startled and annoyed when she discovers the uninvited guest in the morning and writes an emphatic note telling Bat to leave. (“Dear Bat, Bug off! Sincerely, Squirrel”) When Bat finds the note he understands it to mean that Squirrel didn’t like the insects on her bed, so he politely moves them to a corner of the nest. That begins a series of misunderstandings, all conveyed through correspondence, with Squirrel telling Bat to leave, and Bat, ever the optimist, consistently misinterpreting her messages. Eventually Squirrel realizes that she’s come to appreciate the ever-cheery Bat, while Bat knows he’d be lonely without Squirrel, and so the duo agrees to be roommates. Appealing illustrations sweeten this charming comedy of errors featuring an odd couple of the animal world. (Ages 3–6) 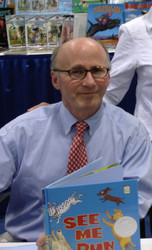