Vanni Espinoza’s plan to leave her small New Mexico town after high school dissolved when her dad was diagnosed with Huntington’s disease. Vanni’s family needs her help at home and at their restaurant. To distract herself from the ever-present fear that she also has Huntington’s, Vanni throws herself into work and casual sex. When she meets Lucas at a nearby pool, he gets her an audition for a mermaid role at a water park and introduces her to his sister, Leigh. Leigh is resentful of having to move from Boston to New Mexico to live with their dad, but she and Vanni hit it off. Soon it’s obvious there’s a mutual attraction between them. For Vanni, who has only dated boys, her relationship with Leigh is eye-opening and wonderful—until she witnesses Leigh’s reckless behavior and angry outbursts. Although Leigh’s anger is not directed at Vanni, Vanni takes a step back. Vanni loves her, but she has enough uncertainty in her life, including trying to decide whether she should undergo genetic testing for Huntington’s. A door opens again between them after Leigh begins seeing a counselor and comes to the realization that she is genderqueer. Strong characterizations distinguish this story about friendship, love, and overcoming fear as two young people come to terms with their bodies—Leigh in terms of her gender identity, Latina Vanni in accepting that she cannot control what her DNA may reveal. (Age 13 and older) 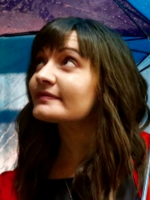