Song of the Current

Caro Oresteia has grown up delivering cargo up and down the river with her father.... read more

Caro Oresteia has grown up delivering cargo up and down the river with her father. After her father is arrested without cause, Caro is blackmailed into transporting a mysterious crate to earn his release. When it becomes clear the large box is being sought by pirates, she opens it, wanting to know what’s inside. It’s a young man, a royal courtier from a neighboring country in political upheaval. He’s arrogant and annoying and utterly useless on a boat until their pursuers force his hand. He’s still not great on water, but it turns out he is good with a sword. It also turns out he’s lying about his identity. If the romance is inevitable, the characters and world-building and action-packed plot make this a satisfying, adventurous read. Markos, it turns out, has a mission that strays from what his handlers expect, and Caro risks her father’s freedom helping him. Meanwhile, the traditional expectations he’s been raised with for women contrast sharply with Caro’s experience. Wherry captains are just as apt to be women as men, while her mother runs a great ocean shipping company, and her parents’ devotion is genuine but they lead separate and fulfilling independent lives. Myth and magic are woven throughout this fast-paced story. Strong-willed Caro is biracial (Black/white), and Markos is her worthy partner in whatever adventure comes next. (Age 12 and older) 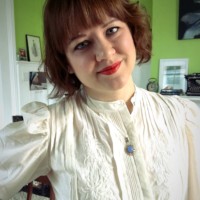