Hidden Figures: The True Story of Four Black Women and the Space Race

“Dorothy Vaughan, Mary Jackson, Katherine Johnson, and Christine Darden were good at math. Really good.” In the late 1940s and early 1950s, Dorothy, Mary and Katherine went to work for the U.S. space agency (now NASA) as computers—people who calculated complex math. The three African American women fought racism, sexism, stereotypes, and segregation within and beyond the agency to take charge of the trajectory of their careers. Christine joined NASA in 1967 to work on the Apollo 11 mission, knowing her dream of being an engineer was made possible in part because of the three African American women who broke ground before her. An energetic narrative focuses on each woman in turn while offering a unifying sense of individual and collective challenges, contributions, and accomplishments. This terrific informational picture book is based on Shetterly’s adult book (not the movie it inspired). The illustrations feature a variety of engaging compositions and scenes. The end matter includes brief biographies telling more about each of the four women’s lives, along with a glossary and author’s note. (Ages 6–9) 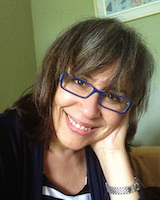