This singular novel begins in 1942 with Radio Dan’s patriotic radio broadcast urging the American citizens of his Pennsylvania town to continue to respond to the war effort. Throughout the thought-provoking story, Radio Dan’s broadcasts are interspersed with 13-year-old Jubal Shoemaker’s first-person accounts of the toll his brother’s Bud’s status as a conscientious objector takes on everyone in one way or another, and with Bud’s letters to Jubal. Bud’s status causes a rift between the brother’s parents and within the community at large. It damages Jubal’s relationship with Daria, who is Radio Dan’s daughter. The title refers to a patriotic song Daria sings on her father’s program. Draft resistance is compared to conscientious objection within Kerr’s fast moving story, as are several perspectives on killing. Can one who participates in any way in military service still be considered a pacifist? What about a pacifist who has killed a person in order to protect someone he or she loves? All of the characters — teenagers and adults, males and females — express varying points of view at one time or another within the novel. Some of them shift opinions as the war continues, or after bombs are dropped on Hiroshima and Nagasaki, or when Bud is victimized for being a c.o. Dialogue references to slang, the movies, styles, and books from the years of World War II accurately establish the decade as well as the turmoil on the home front. Kerr’s note at the end states that she “remembers clearly the hometown boy who chose not to fight when all the other young men, including her brother, were marching off to war.” There were no easy answers then, and there are no facile conclusions in this novel, only questions, many questions. (Ages 12–15) 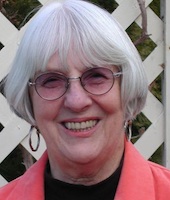