Lily is the daughter of a famous maker of mechanicals; when her dad’s airship... read more

Lily is the daughter of a famous maker of mechanicals; when her dad’s airship crashes and he’s presumed dead, her father’s housekeeper, Madame Verdigris, takes control of Lily’s life. Robert is son of a clockmaker in the village where Lily lives. When he sees two men pursuing an injured fox, he helps the fox, Malkin, a mechanical with a message for Lily from her father. It quickly becomes clear Madame has no interest in Lily and keen interest in something Lily’s father is rumored to have invented: a perpetual motion machine. The two children, both white, join forces with reporter Anna Quinn, who rescues them in her air ship when they’re escaping the two men who’d been pursuing Malkin. The duo, also mechanicals, were sent by Madame Verdigris. Steampunk meets orphan story in this captivating tale, first in a series, that has hair-raising moments yet an overall cozy feel. From bold Lily to less confident Robert, fearless Anna to surly yet stalwart Malkin, appealing characters abound, as do moral questions about the perception and treatment of mechanicals. (Ages 8–11) 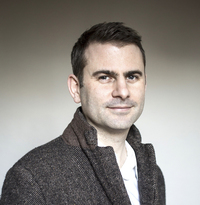