Pie in the Sky

Jingwen, his little brother Yanghao, and their mother are recent immigrants to Australia... read more

Jingwen, his little brother Yanghao, and their mother are recent immigrants to Australia (probably from China, although it’s never specified). Their father was killed in a car accident two years earlier. Jingwen misses baking with his father, who dreamed of opening a bakery in Australia called Pie in the Sky. Frustrated with his inability to learn English, and struggling to make friends at school, Jingwen focuses instead on secretly recreating the cakes he and his dad used to bake together, one each evening with Yanghao when their mother is away at work. Although Yanghao is happy to devour as much cake as possible each night, he eventually shares some with a neighbor, an act that leads to the unraveling of their secret baking sessions and the revelation that Jingwen is harboring guilt over his belittlement of the humble cakes his father made in their bakery back home. A graphic/fiction hybrid, this is a compelling and emotionally complex story about starting over in a new country. At its heart lies Jingwen’s relationship with Yanghao, who provides both comic relief and a stable (if annoying) presence in his life when everything else feels foreign. (Ages 8-13) 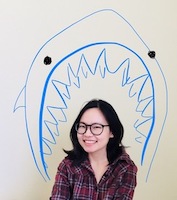