It doesn’t matter which side of Brent Hartinger’s fun, far-from–frivolous... read more

It doesn’t matter which side of Brent Hartinger’s fun, far-from–frivolous novel readers start first, they’ll end up in the middle, where two best friends catch one another up on the craziness of love that has been consuming and complicating each of their lives. The backdrop for both stories featuring characters from Hartinger’s Geography Club (HarperTempest, 2003) is the production of a campy horror film. Min, Russell, and their friends have gotten jobs as extras. It’s while auditioning that Min meats Leah. As the two dance around and finally act on their mutual attraction, Min falls head over heels, but finds her principles and her pride suffering when Leah reveals she’s in the closet at home and at school. Meanwhile, Russell’s work on the film has reunited him with Kevin, the boy who dumped him the year before. Since then, Russell has fallen in love with Otto, but Otto lives across the country while Kevin is right here, sending definite signs of interest Russell’s way. Hartinger offers their two points of view on many overlapping events in a novel comprised of two stories that literally meet in the middle. Perspectives on characters and events change not only between the stories, but within them as the tender hearts of characters are revealed. A delightful, tight-knit circle of friends surround Russell and Min, providing both levity and advice for the lovelorn along the way. (Ages 12–16) 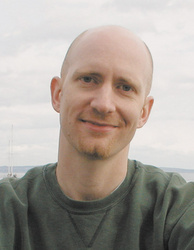 Blog for Brent Hartinger: Voices in My Head