Chinese American Christine’s parents own a duplex, and the new tenants next... read more

Chinese American Christine’s parents own a duplex, and the new tenants next door are Moon and her single-parent mom. They are also Chinese American, but Moon’s mom is more into New Age beliefs than traditional culture. Christine loves hanging out with Moon, who has a lot more freedom than she does. Moon is free-spirited and creative, although her imagination sometimes seems over the top. The other kids at school are initially leery of her—there are rumors she had to leave her last school because of fighting—but Moon makes friends easily and soon Christine finds herself a little jealous, and she betrays Moon. Moon gets angry, the first of many times, and then the fights with other kids start. Her behavior is perplexing to Christine until a sudden, surprising revelation near story’s end offers an explanation for some of Moon’s behavior, while Moon’s free-spirit and creativity are simply part of who she is. The author/ illustrator superbly explores the complexities of friendship in middle childhood. The characters are distinct individuals both visually and textually. The book concludes with an author’s note about the autobiographical parts of the story. (Ages 9–12) 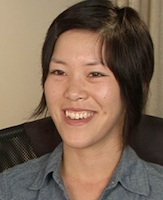