In a family composed of three strong, independent women (daughter, mother, grandmother), it's often what's left unsaid among them that resonates the loudest for the youngest family member, 14-year-old Emmie. Now that Grandmother Ola is dying with cancer, Emmie feels compelled to hear the truth behind their silences. She knows that something awful happened long ago that no one ever mentions. What was it? In a spare, eloquent first novel, Angela Johnson shows that silence can dull the pain of tragedy but can never really cure it. Emmie discovers that one must ring the dead into heaven with great noise, by elegizing, keening or even by striking a plow with a hammer, a folk ritual known as "toning the sweep." (Age 12 and older)

Meet-the-Author Recording with Angela Johnson about Toning the Sweep 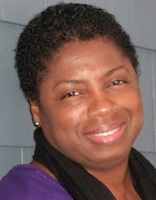