Nancy Werlin offers just the right mix of fantasy and reality in a deliciously tense tale about a contemporary teenager who discovers she has inherited a longstanding family curse. Lucy Scarborough’s birth mother Miranda is now a homeless, mentally ill woman sometimes seen roaming the town. But Lucy’s own life with her adoptive parents is almost idyllic, until the night of her senior prom. Raped by the shy boy escorting her, Lucy is at first certain of only one thing in the pain and confusion that follows: The boy was not himself. And Lucy is absolutely right, as readers already know. A seemingly charming man who has been insinuating himself into Lucy’s family is really the arrogant, evil Elfin Knight, and Lucy is the latest in a long line of Scarborough women to whom he has laid claim. The discovery that she is pregnant leads Lucy to the long-forgotten letter that teenage Miranda wrote while awaiting Lucy’s own birth. In it Lucy learns a man called the Elfin Knight cursed a long-ago Scarborough woman who refused him. Ever since, Scarborough women become pregnant at eighteen, and then go mad if they can’t complete three impossible tasks by the time the baby is born. The tasks have been passed down for generations in the folk song “Scarborough Faire,” but the song offers no clues on how to complete them. That’s where Lucy’s fortitude, and the love, support, and ingenuity of her family come in. From her adoptive parents to the boy-next-door—who’s been in love with her for years—Lucy is far from alone as she seeks to put an end to the Elfin Knight’s hold on her family in this immensely satisfying original fairy tale. (Age 12 and older) 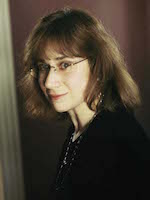