Testing the Ice: A True Story about Jackie Robinson

by Sharon Robinson and Kadir Nelson

Sharon Robinson’s engaging, child-centered reminiscence recalls events after her family moved to Stamford, Connecticut, in 1955. She and her brothers were thrilled to make new friends, and throughout the summer, all of the kids swam in the lake on the property. “But no matter how much we begged, my dad would never come into the water.” It was also a thrill to have their friends over to play, and everyone loved when her father, Jackie Robinson, would talk about breaking into major league baseball. After his retirement, Jackie was home more, but he still wouldn’t swim in the lake. Then one cold winter day when the kids were eager to skate, he tested the ice for them, despite his inability to swim. “My dad is the bravest man alive.” Sharon’s sentiment has taken on a deeper significance for her as an adult. “Dad showed the same courage on the ice that day as he did when he broke the color barrier in baseball.” Kadir Nelson’s paintings enhance the emotional tenor of Robinson’s storytelling, whether capturing the gravity of Jackie Robinson’s discussion with Branch Rickey about integrating the major leagues, or the awe on the faces of the children listening to Jackie tell that story. (Ages 6–10) 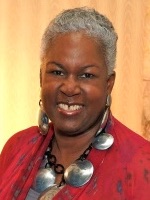