“Swish-swoosh.” The sound of waves washing the shore repeats throughout... read more

“Swish-swoosh.” The sound of waves washing the shore repeats throughout an engaging picture book in which a young African American boy is the architect of his own adventure. After Gregory draws “a Sandy lion” at the beach, his dad cautions, “Don’t go in the water, and don’t leave Sandy.” And Gregory doesn’t, but as the tail he draws on Sandy gets longer and longer, it takes him farther and farther away from his dad: over an old sand castle, around a horseshoe and a ghost crab, all the way to a jetty. “But Gregory did not go in the water, and he did not leave Sandy.” It’s only when he finally looks up that Gregory realizes how far he’s gone. He turns a moment of worry—which one of those distant figures sitting on towels is his dad?—into masterful problem solving when he follows Sandy’s tail over and around all the objects, back to his dad’s welcome smile. Floyd Cooper’s sun-washed, sandy illustrations are the perfect accompaniment to this terrific picture book narrative. Highly Commended, 2011 Charlotte Zolotow Award (Ages 3–7) 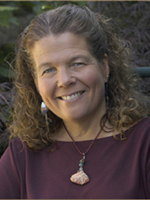