The Year of Goodbyes: A True Story of Friendship, Family, and Farewells

Debbie Levy’s narrative in verse is built around her mother’s poesialbum... read more

Debbie Levy’s narrative in verse is built around her mother’s poesialbum —a traditional friendship album that was popular among girls in Germany at the time of Hitler’s rise. Actual entries from her mother’s friends and classmates form the epigraph for each chapter as twelve-year-old Jutta (Levy’s mother) describes how life for Jews becomes more and more restricted and dangerous. Her father is desperately trying to obtain permission, and then visas, for their family to emigrate to America. Eventually they are able to escape the dangers in their homeland. Blending fact and fiction, Levy is able to convey the monumental events taking place in Germany through the eyes of a girl whose life revolves around family and friendships, all of which become more and more cherished as time goes by and dangers increase. In addition to photographs, a timeline and bibliography, Levy’s afterword offers brief accounts of what happened to her mother’s friends and classmates whose names and words are part of Jutta’s poesiealbum , adding additional depth to this fascinating story. (Ages 10–13) 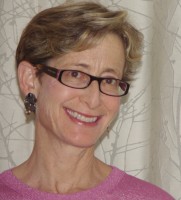 Created by Jewish Books for Children with Author Barbara Bietz