What Momma Left Me

Just after their mother’s death, thirteen-year-old Serenity and her twelve-year-old... read more

Just after their mother’s death, thirteen-year-old Serenity and her twelve-year-old brother, Danny, have gone to live with their maternal grandparents. In this narrative told bit by bit in a young African American’s memorable first-person voice, Serenity reveals that her mother was killed by her father, who had a history of abuse. As Serenity starts at a new school, makes a good friend, and finds herself drawn to a boy with a reputation for trouble, she finds herself struggling with what happened, especially as she sees her brother heading down a dangerous path of his own. But Serenity’s grandparents and other extended family members provide her with a strong sense of security and support. In dealing with changes and decisions of her own, Serenity determines that their love and her own religious faith are essential to helping her see the future as something filled with possibility. Renée Watson’s impressive first novel tackles some of the hard, hard things that can happen in a child’s life while firmly asserting the power and promise of hope and love. (Ages 10–14) 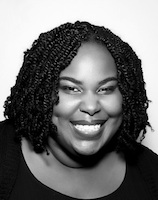 Created by Reading While White

Teacher Guide from Bloomsbury and Walker Books for Young Readers

Reader Guide from Bloomsbury and Walker Books for Young Readers