Although pairs of male and female hip-pocket frogs initially watch over their eggs... read more

Although pairs of male and female hip-pocket frogs initially watch over their eggs together, once the brood hatches into tadpoles, it’s the father who protects the offspring by carrying them in the pockets hidden on his hips. The majority of this picture book story focuses on the thirty days the tadpoles travel aboard their thumbnail-sized father as he avoids the many dangers present in his Australian temperate rainforest habitat. Eventually the tadpoles metamorphose and their father watches while “the twelve tiny froglets hop off and crawl away. The tadpoles that grew up inside his pockets are ready to be on their own.” A lyrical text and gorgeous watercolor illustrations capture the drama of the tiny amphibians’ transition from egg to frog, and are augmented by a glossary, author’s note, and list of additional information sources. Honor Book, 2011 Charlotte Zolotow Award (Ages 4–8) 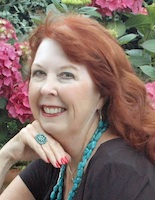 Blog for Sandra Markle: Write On!