John Adams loved to argue. Thomas Jefferson hated it. John Adams was a lawyer who liked to farm. Thomas Jefferson was a lawyer who liked to design and build. Still, “they both cared deeply about the American colonies, and neither of them cared much for George.” That would be King George, the “tyrant” (they both agreed on that, too) who ruled the colonies. Author Barbara Kerley and illustrator Edwin Fotheringham have again collaborated to create a spirited and informative picture book history—in this case, about two men who found common ground on which to form a new nation. Among other things, it was bold John who persuaded shy Tom to put his pen to work creating what would become the Declaration of Independence. In an author’s note, Kerley describes the two men’s later falling-out over how the new country’s government should be structured and how they eventually “made peace with their differences.” Source notes for all quotations are included in this whimsical yet illuminating account. (Ages 6–9) 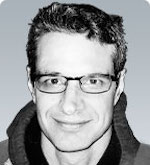