The Difference Between You and Me

Raised by ex-hippie parents, sixteen-year-old Jesse considers herself a political activist and anonymously posts manifestos all over her high school. But Jesse is involved with a closeted junior named Emily who is the antithesis of everything Jesse claims she stands for. Jesse is out, but Emily doesn’t want anyone to know she’s a lesbian, so most of their time together is comprised of heavy make-out sessions in a little-used bathroom. Jesse is so head-over-heels that she doesn’t question anything Emily does, including trying to get corporate sponsorship for the prom. Then Jesse meets Esther, a true political activist whose friendship opens Jesse’s eyes to authentic grassroots activism born of genuine conviction. Madeleine George’s novel moves back and forth among the three young women’s stories, although Jesse’s is the predominant narrative. George explores teens’ perspectives on social issues and activism, looking at how these are influenced by personal experience, as well as by friendship, romance, and peers. Esther’s passion for her causes is genuine, but so, too, is her desire to escape an unhappy home. Emily’s understanding of political issues is naïve—at times comically—but her inability to come out is very real and poignant. And Jesse comes to realize she deserves to be loved openly, an understanding that grows from the discovery that standing up for what you believe starts with standing up for yourself. (Age 12 and older) 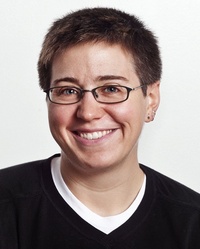