An elaborate, satisfying supernatural mystery with more than a little of the macabre... read more

An elaborate, satisfying supernatural mystery with more than a little of the macabre opens as a recently released dark spirit begins terrorizing 1926 New York City, roaming from the Bowery to the haunts of the wealthy to the streets of Harlem with murder on its mind. Seventeen-year-old Evie O’Neill has come to New York from Ohio, sent to stay with her uncle, curator at the Museum of American Folklore, Superstition and the Occult. Evie has a secret—when she holds an object, she learns things about the person it belonged to. When her uncle is consulted by the police after a gruesome murder, Evie goes along. She touches the shoe buckle of the young dead woman and gets flashes of what happened to her. Meanwhile, in Harlem, Memphis Campbell is worried about his younger brother, Isaiah, who is having visions in his dreams. Memphis himself was once a healer, but his gift failed him when he needed it most and he refuses to try again. Evie and Memphis and other distinctive young adult characters—from Ziegfeld Girl Theta Knight to con man Sam Lloyd—all have supernatural abilities that will be needed as evil descends on the city. In most cases, they’ve never told anyone what they can do, but as their lives intersect, it becomes apparent fate is showing its hand. By story’s end, one mystery is solved, but others are barely beginning to surface, setting the stage for subsequent volumes of this inspired new series set against a richly developed historical backdrop. (Age 13 and older) 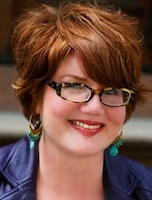