by Sally Lloyd-Jones and Alexandra Boiger

Doreen is an Ample Roundy Fish heading upstream to visit “her second cousin twice removed who’s just had 157 babies” when she spots a dragonfly in the water. “A lovely snack for my journey!” she thinks, swallowing it. Flying into the air as a fisherman lands his catch, she cries “Yippee! … I’m going on an outing!” Blind optimism enables Doreen to put a positive spin on this and other seemingly harrowing events that follow, including being snatched into the beak of a Great Blue Heron. She mistakenly identifies him as an Egret, which is precisely what leads to her release when he opens his mouth to correct her (one has to wonder if she isn’t as naïve as she seems). There’s a terrifically funny disconnect in this over-the-top offering between Doreen’s unflagging positivity and the ongoing commentary that reflects a far grimmer perspective (“Oh, poor Doreen. No. It’s a HOOK. And it’s not a treat. It’s a TRAP … This may be the most awful day of your life.”). But guess who’s enjoying a reunion with her cousin by story’s end? Illustrations showing Doreen in headscarf with matching red umbrella are the perfect fit for a good-natured story marked by lyricism and absurdity. (Ages 5–9) 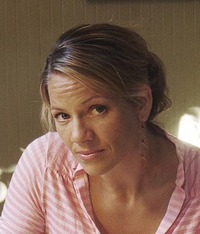