The impact of China’s Cultural Revolution on the lives of a Chinese family... read more

The impact of China’s Cultural Revolution on the lives of a Chinese family unfolds through the eyes Ling, who is nine as this story begins. Her father is a doctor who admires the west and is teaching her English; her mother is a traditional healer. Ling’s perspective on the revolutionary changes is authentically childlike. At school, she is singled out and bullied as one of the few children who hasn’t joined the Young Pioneers. At home, as government restrictions tighten, she longs for the pretty dresses her mother used to make her (flowered fabric is no longer sold) and misses her favorite foods. When Comrade Li, a political officer for Mao’s government, moves into her building, and indeed, into a room that was formerly part of her own apartment, Ling sees only his charm at first. She gradually realizes what her parents already understand—he is a threat. Comrade Li becomes the driving force behind many arrests and scenes of public humiliation as the Red Guard rounds up neighbors, friends, and eventually family. The moment Ling realizes her father, whom she idolizes, cannot protect her family is painful and powerful—one of many achingly real revelations in Ying Chang Compestine’s compelling novel, based in part on her own family’s experiences. (Ages 10–14) 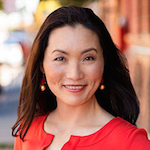