“In Iran, the Caspian Sea looked endless, blue, and beautiful. How will the... read more

“In Iran, the Caspian Sea looked endless, blue, and beautiful. How will the sea look in Brooklyn?” wonders a little girl going to the beach for the first time since moving to the United States. She’s used to the beach on the Caspian Sea where there were rules, and a big curtain in the water separating men and boys from women and girls. Once a group of boys peeked through a hole in the curtain. “The Islamic beach guards ran to fix the holes in the curtain. It was chaos! But it was fun. Will it be fun in Brooklyn, too?” There was ice cream at the beach in Iran, and the saffron-flavored ice cream was her favorite. It turns out there is no saffron ice cream at Coney Island, but another girl encourages her to try chocolate crunch, and it’s good, too! So is being at a (new) beach with a (new) friend. The tenor of the narrative and the whimsical illustrations play off each other well as they depict cultural differences and make other comparisons without setting anything up as “the norm.” (Ages 4–7) 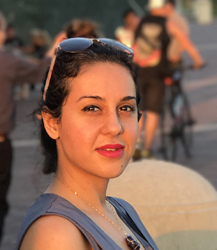 Created by Office of International Affairs (Univ. of Maryland)

View on Office of International Affairs (Univ. of Maryland) Share