“Evan and his dog did everything together.” Their favorite among many... read more

“Evan and his dog did everything together.” Their favorite among many things is working in Evan’s garden. “But one day, the unthinkable happened.” The death of Evan’s dog sends him into a spiral. First Evan destroys the garden, then he lets “spiky,” “prickly” weeds take over. But he leaves a rogue pumpkin vine that creeps under the fence into his garden alone—it’s prickly and twisty, too. Soon he begins to tend the vine. Come fall, he takes the pumpkin to the fair, where he spends time with friends and wins third prize: ten dollars “or one of the pups in that box.” A story written with vivid, visceral language shows that sadness can lead to anger but the two emotions are not the same. Lush acrylic, oil, and pencil illustrations show Evan as an anthropomorphized fox, allowing kids space to consider their own feelings without being overwhelmed in a story in which grief and love go hand-in-hand, but with time so do hope and healing. Highly Commended, 2019 Charlotte Zolotow Award (Ages 5–8)

Meet-the-Author Recording with Brian Lies about The Rough Patch 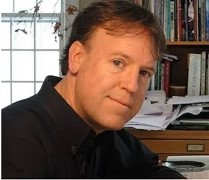 Created by Think Act Be