Soldier's Heart: Being the Story of the Enlistment & Due Service of the Boy Charley Goddard…

There was no such thing as post-traumatic stress disorder at the time of the Civil... read more

There was no such thing as post-traumatic stress disorder at the time of the Civil War. The symptoms certainly existed, Paulsen notes in his foreword to this grim and moving novel, but there was no understanding among the majority of people as to what returning soldiers had experienced and how the trauma continued to affect many of their lives. Still, he notes, people knew they were different. "They were said to have a soldier's heart." Paulsen's story is based loosely on the life of a real person. He explains in an author's note that Charley Goddard was 15 in 1861, when he lied about his age to enlist in the first Minnesota volunteers. He died in 1868 at the age of 23, torn apart both physically and emotionally by what happened to him in the war. The fictional story Paulsen constructs to link those two events in the real Charley's life is a tale of an innocent, unsuspecting boy's experiences on the cruel and unforgiving battleground of war. At first Charley is swept up in the excitement of going to war--marching in parade, the steamboat ride followed by the train ride east. He didn't like how much the other soldier's swore but it couldn't dampen his enthusiasm for the battles to come. Charley's excitement is soon replaced by horror and fear. " Make it stop now! " his mind cries out in the midst of his first battle, but of course it doesn't stop, not in that battle, and not in all that are to come. The encouragement and the praise of commanding officers is meaningless. Everything is meaningless but survival, and even that seems pointless at times. The details are realistic and brutal in this harrowing novel that leaves no doubt about the inhumanity of war. (Ages 13- 16) 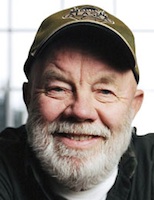