The Flag with Fifty-Six Stars: A Gift from the Survivors of Mauthausen

In early May of 1945, SS guards began fleeing Mauthausen, a Nazi concentration camp in Austria. The starving prisoners knew the Americans must be near, and a small group of them began working on a surprise for their liberators. They took white from sheets, red from Nazi banners, and blue from their own tattered jackets. They located a sewing machine and scavenged needles and thread. When Colonel Richard R. Seibel of the American forces entered Mauthausen on May 6, he was presented with their gift: an American flag. The prisoners hadn’t been certain how many stars to put on the flag, so they settled on 56. Susan Goldman Rubin did extensive research to write this moving, detailed account. In an author’s note she indicates what is known for certain and what is still debated about the liberation of Mauthausen and the creation of the flag, which now is held at the Simon Wiesenthal Center in Los Angeles. A photograph of the flag at the end of Rubin’s narrative serves as a tangible reminder of how the human spirit can endure, as long as there is hope. (Ages 7–10) 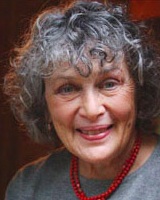