The Snowflake: A Water Cycle Story

A snowflake lands on the peak of a mountain in January. Over the course of the next... read more

A snowflake lands on the peak of a mountain in January. Over the course of the next 11 months, the snowflake changes both location and form. Blown into a mountain pond in February, it melts in March, a tiny droplet that sinks into an underground stream. By May it’s drawn into the irrigation system on a farm. It evaporates in June, rains down onto the earth in July, and comes out a bathroom tap in September. By December, it’s a snowflake once more. Each two-page spread in this detail-rich, lyrical book of information follows the snowflake’s transformation over the course of a month. The brief text describing the snowflake’s activity each month is accompanied by a sweeping, stylized painting. (Ages 4–8) 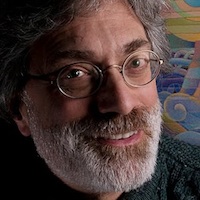